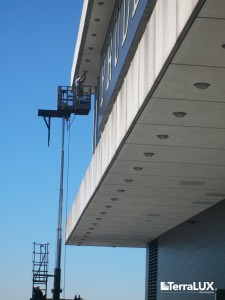 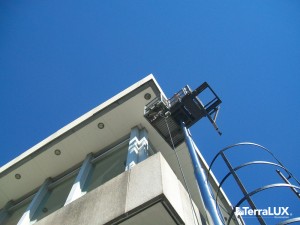 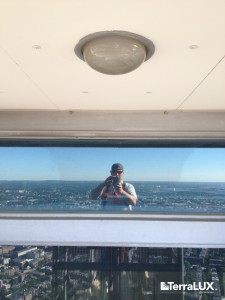 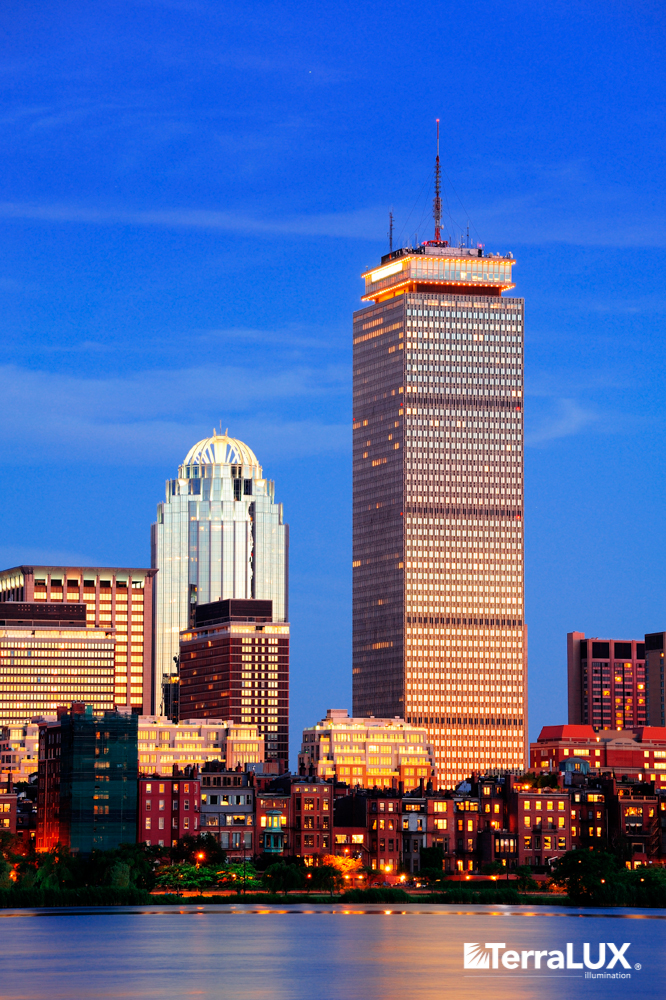 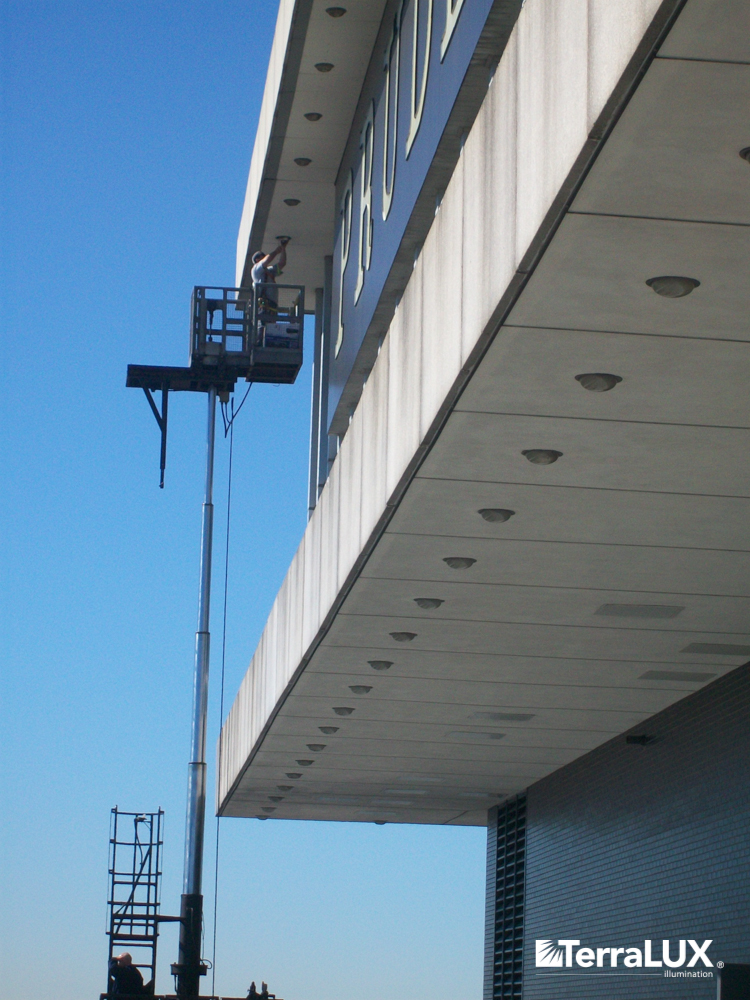 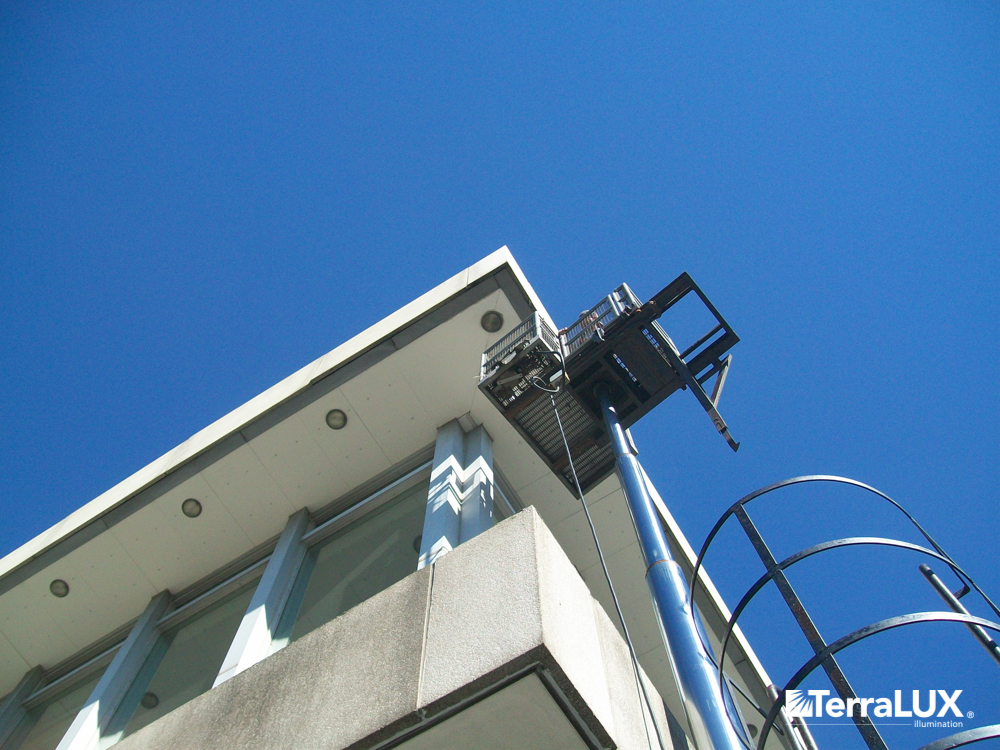 The Prudential Building in Boston, Massachusetts, affectionately known locally as “The Pru”, is the second tallest building in the Boston skyline. Part of the Prudential Center complex, the building was designed by Charles Luckman and Associates for Prudential Insurance. Completed in 1964, the building is 749 feet (228 m) tall, with 52 floors.

Occupying the 52nd floor is the Top of the Hub restaurant, and resting outside its windows that offer sweeping views of the city is the iconic “Prudential” sign. Illuminating the perimeter of the building above and below the sign are 168 recessed light fixtures.

Prior to the TerraLUX retrofitting project, these fixtures contained compact fluorescent lamps that cast a yellowish hue on the building. In order to improve the aesthetics of the building, lower energy costs, and reduce maintenance frequency and costs, the CFL lamps were replaced with TerraLUX Linear LED Engines, model number TLM-L06A-A065012R.

“The TerraLUX Linear LED engine was the only product I could find that could be used in this particular application. The TerraLUX product has improved the quality of lighting tremendously. The lights used to have a yellow hue to them. Now they produce crisp, white light.”

In preparation for the retrofit installation, Glenn Forbes, Managing Partner of Integrated Electric, the contractor in charge of the Prudential Building project, mounted the TerraLUX Linear LED Engines to pre-manufactured base plates. “The TerraLUX Linear LED Engine helped us overcome finding a product that was easy to install, and that out-performed the existing compact fluorescent lamps,” said Forbes.

Once assembled off-site, the finished base plates with TerraLUX engines attached were packaged and taken to the project site. Only one installer was required to execute the project, and168 pre-assembled base plates were retrofitted to the existing lighting fixtures in one week.

According to Forbes, by retrofitting the Prudential Building with the TerraLUX Linear LED Engines, 28 percent of energy costs will be saved on an annual basis. Additionally, maintenance costs will be greatly reduced. The light fixtures framing the 52nd floor are only accessible from a window washing staging, and replacing compact fluorescent bulbs resulted in increased hours spent on maintenance as well as higher costs for new lamps.

The TerraLUX Linear LED Engine is designed and fabricated with a Smart Thermal Design and patented LEDSense® Thermal Foldback circuitry. The unique design of the engine transfers heat emitted from the LEDs to the metallic housing of the fixture with further protection from the LEDSense® circuitry. If the heat of the engine reaches high levels, the LEDSense® will protect the LEDs by lowering the power of the lamp until a safe temperature is reached, preserving the lifespan of the LEDs. In the case of the Prudential Building, this will result in reduced maintenance costs and a reduced number of lamps requiring replacement on a regular basis.

“Overall I was extremely impressed with the quality of the TerraLUX product,” said Forbes. “We received 168 engines in perfect condition from TerraLUX, and in my experience that level of quality is unheard of. And, the Prudential Building has never looked better. The building stands out in the skyline now, the lighting is sharp and fresh, and it really draws your eye to this classic Boston landmark.”